Hemianopia – Should one drive? 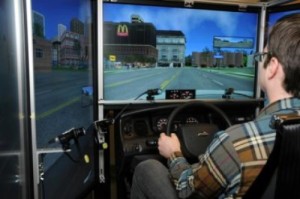 After having spent the better part of my life as a EMT/Paramedic, and then taking on professional driving. I still find it interesting when topics like this come out. I can’t say that I remember reading too much about this, but wonder if this could explain a lot, for hundreds of people across the world.

As an EMT/Paramedic, I can recall accidents that made no sense. Reading about accidents on retirement communities sometimes left one wondering about the why, what really caused them. For the most part when the person, or persons involved were young, drugs became the conclusion of choice.

I am now forced to ask if there are those out there who have simply just never been diagnosed, by the proper medical tests. Here is what the following study, done at, Massachusetts Eye and Ear, had to say about this.

A diagnosis of hemianopia, or blindness in one half of the visual field in both eyes as the result of strokes, tumors or trauma often means the end of driving

In about half of the states in the United States and in many other countries, driving with hemianopia is prohibited

This is where it gets scary. Only about half of all the states feel that it is a high risk to stop folks from driving.  The study used a driving simulator, where I don’t fully believe that most simulators are 100% accurate. If you can’t do it 50% on one of the ones used. There should be lots of red flags going up.

I take notice that Trauma is a likely cause, so someone who is young may be at risk as well. Since strokes, and tumors are generally considered to come to play in one’s life later on in life.

Here is what another part of the study showed, as the finding of their study.

“We found that participants with hemianopia showed compensatory scanning patterns in that their first scan was usually to the side of their field loss. Drivers with right hemianopia tended to look to the right before looking to the left. By comparison, the normally sighted drivers and drivers with left hemianopia typically looked to the left first,” Bowers said.

The Smith System driving program is one of the largest and most used by many major driving organizations in this country. One of the “keys” to driving is: Keep your eyes moving. When putting this into place a driver is to scan the area in his or her path, and the sides frequently.  I have used the Smith System as well as my Emergency Vehicle Operator Course training, in my personal car for years. And this key alone is responsible for avoiding being in countless accidents of my own.

So as you read, ask yourself is there someone you know who may be at risk of this, if they mean anything too you then maybe read on, and help them.

Let’s not only make the roads safer, but keep those we love around to share it with us.

I am an ex- NY City Emergency Paramedic. Life brings us new challenges, adventures, and downfalls. I look to making them all a positive way to grow. From here we only go up.
View all posts by MedicSmurf »